He Wouldn't Give In

I thought it would be nice to start with a little inspiration! Whether you're a runner, a walker, or a dedicated yoga do-er, we all have those times when we just don't want to roll out of bed and get moving. But sometimes we just need to think of how blessed we are that we can roll out of bed and move our bodies. 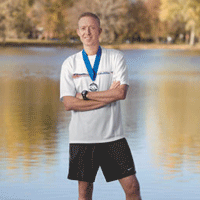 The Denver Marathon was less than a month away, and Steve Baker was ready. The 33-year-old Denver sales rep had gotten himself into the best shape of his life, and predicted a four-hour finish in his first marathon. He was anticipating what it would feel like to cross the finish line, to feel the weight of a medal around his neck, to feel his parents' embrace as they congratulated him on his first 26.2-mile endeavor.

Then, in a split second, he felt nothing. On September 19, 2008, Baker broke two cervical vertebrae after he dived into a nine-and-a-half-foot deep swimming pool and hit his head on the bottom. "I heard something snap and my body went limp," Baker says. "I was rescued, but I couldn't feel my body.'"
Two hours later, Baker underwent a spinal fusion to stabilize the broken vertebrae. He awoke from the six-hour surgery in a halo brace, with no sensation from the neck down. Yet Baker was a "blessedly lucky man," according to his doctor, Indira Lanig, M.D. Because his injury was classified as "incomplete," meaning his spinal cord was damaged but not severed, there was a possibility he would recover some functioning. "Spinal nerves are like a freeway," Dr. Lanig says. "In Steve's case, there was a pile-up that his neuromuscular system could untangle with time, rather than a 'complete' injury, which is irreparable."
Even so, each incomplete injury is unique—some people regain feeling but no movement; others may have movement but no feeling—and it's impossible to predict a recovery timeline. "At first, I was very depressed," Baker says. "I felt like a prisoner in my own body."
Three days later, he moved a toe. The next day, a pinkie finger. A week later, a knee. Then just three weeks after the accident, he was hobbling on crutches. These would be the first steps of his training for the 2009 Denver Marathon. Initially, Baker set the marathon goal to show loved ones his spirit was strong. But as he watched his father run the 2008 Denver Half-Marathon in his honor, the more Baker wanted to run for himself.
To get to the starting line, Baker had to overcome many obstacles. He had to wear the halo for three months. Then he had to retrain his body to run: Point your toes up. Land on your heel, 10 feet at a time. Progress was slow. "I couldn't get on a treadmill without almost killing myself," he says.
In March, he got help from personal trainer John Faczak. "We had to reeducate his neuromuscular system," Faczak says. "He could almost run a mile, but he limped through it. He couldn't pick up his legs."
Baker eventually regained his coordination. "At first, I'd be real clumsy, I'd be all over the place," he says. "But as I kept running, I could go farther and farther." Even though he was steadier on his feet, he had to train through muscle spasms, which he still experiences on his right side. And he remains insensitive to temperature and pain on his left side.
To test himself, he ran the Rocky Mountain Half-Marathon in June—an important milestone. He ran a strong 2:06.
Baker remained confident until a month before his goal race. Five miles into his last 20-miler, he experienced intense knee pain that forced him to stop. And then just five days shy of race day, Baker was diagnosed with a hernia. The doctor was a runner, so he didn't try to tell Baker not to run. "He said, 'It's going to be painful,'" Baker says. "He was right."
On October 18, Baker ran the Denver Marathon despite a strained knee ligament and a hernia, which inflicted so much pain he grunted the last miles like a tennis player. But he achieved his goal. "It turned into a guts race, and I was ready for it," says Baker, who finished in 4:34 (chip time). "During the final stretch, I saw snapshots of all the trials and tribulations of the last year. It was totally overwhelming. I felt amazing."
Posted by trisha*n at 8:54 PM 0 comments